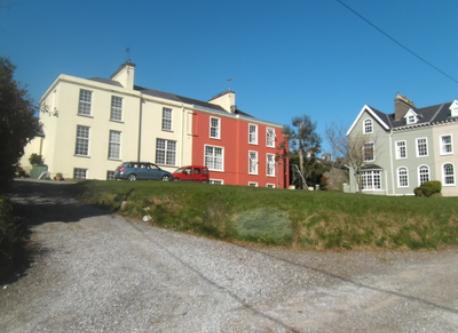 Upper Park. Our house is the red one. 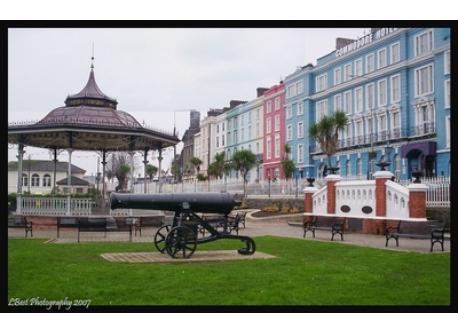 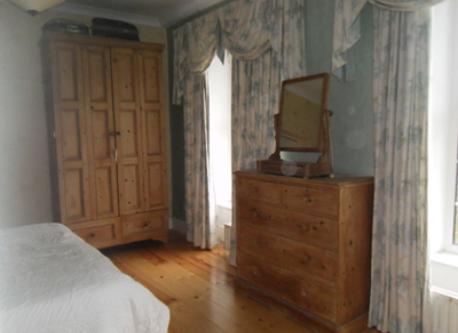 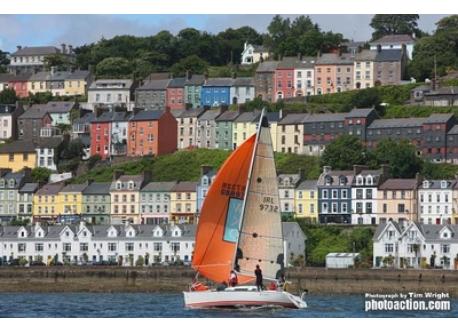 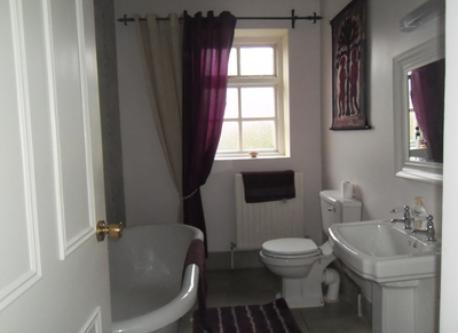 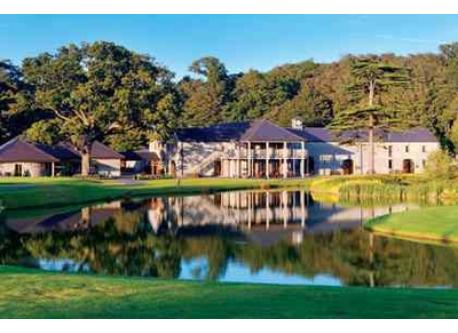 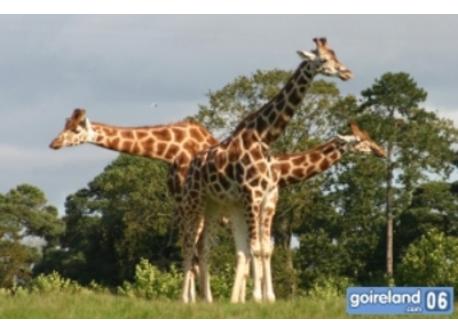 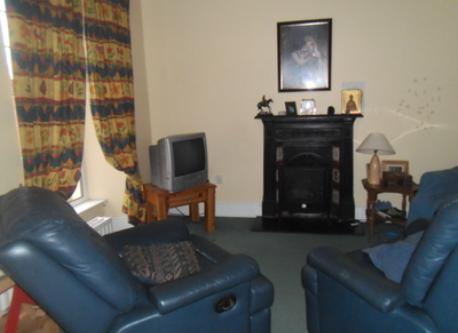 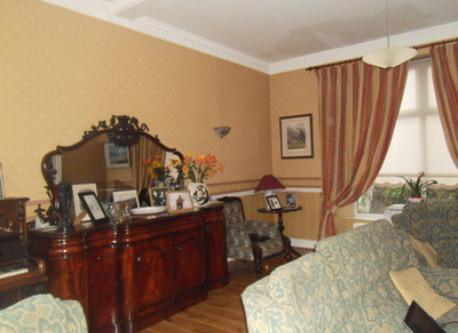 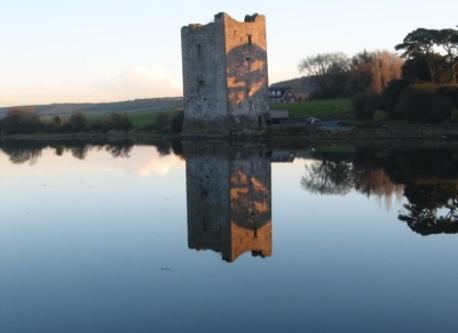 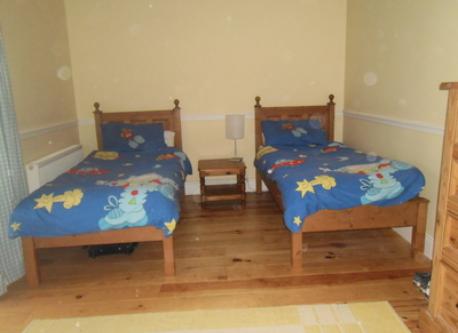 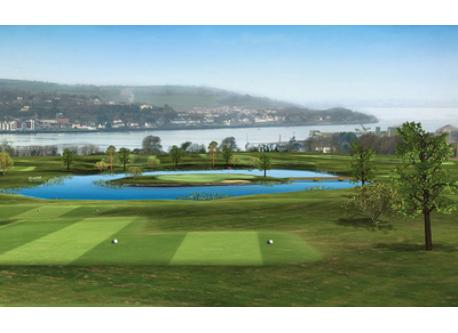 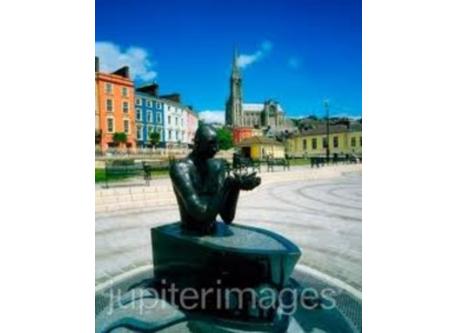 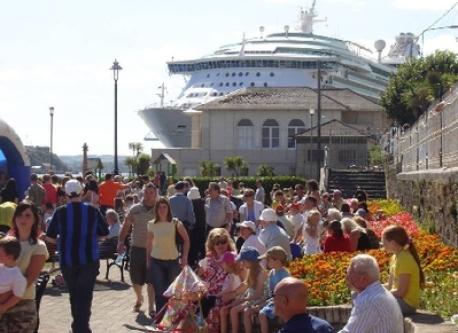 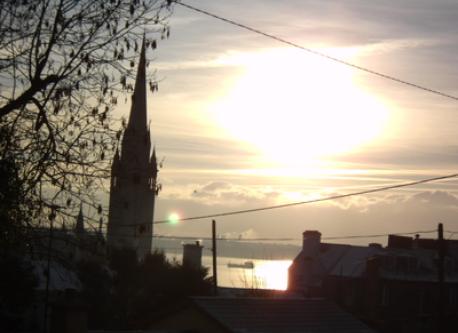 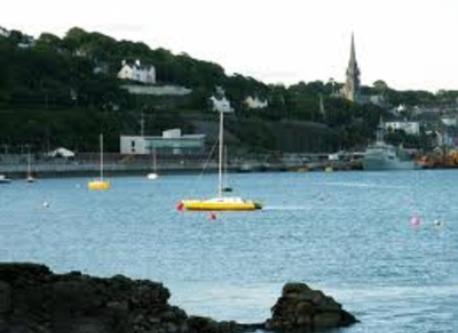 View of Cobh from local beach 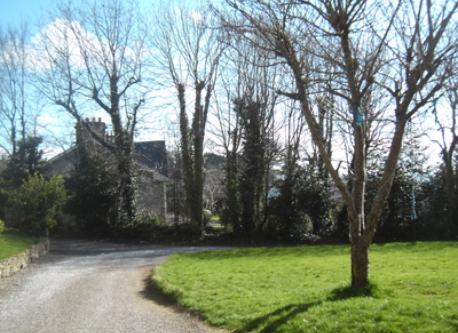 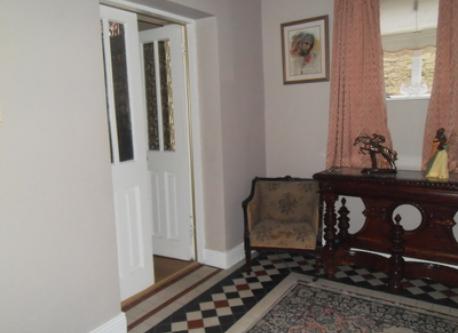 We have just completed our 6th exchange and are now open to offers for Summer 2017.
We are very flexible about how long you stay in our home. We would like to spend about 3 weeks but are open to all suggestions.
Our home is a three- storey Victorian house which retains many of its original features. There are bedrooms on the first and second floors. We have four double bedrooms and three bathrooms. There is a large sitting room as well as a children's playroom. We have a super king size bed in the main bedroom which is en suite. The second bedroom has a king size bed and the third bedroom has two single beds. The fourth bedroom has a double bed. All beds have memory foam mattresses and hotel standard linen is provided.
We share a large garden with the other three houses in our park and there is a sheltered patio area to the rear of the house.
The kitchen has been completely refurbished this year and has every necessary convenience. Cobh is a harbour town ideally situated to explore both East and West Ireland. Cobh  is a very interesting town to spend time in. Its maritime history is excellently brought to life in Cobh Heritage Centre where one can relive the experience of the millions who emigrated from Cobh during the famine period. Cobh was the last port of call for the Titanic on its ill-fated maiden voyage. In 2012 the 100th anniversary of the sinking of the Titanic was commemorated  throughout the year. A new interactive Titanic museum opened in February 2012. This is an excellent way for all the family to learn about Titanic. Cobh is also the burial place for victims of the Lusitania. Cobh is a cosmopolitan town which hosts visits from international cruise liners  weekly throughout the summer period. For the sporting enthusiast  it is possible to sail, row and windsurf just minutes from our house. Cobh boasts its own 18 hole golf course and Fota golf club is only a ten minute drive away.  Fota island is also the location of Fota wildlife park  and Fota house, both wonderful attractions for adults and children. Rushbrooke tennis club is within walking distance of the house as is the local public swimming pool (indoor and heated), Elton pitch and putt club and children's playgrounds. There are many musical recitals given throughout the summer in the local park (the Promenade). Acoustic concerts are held weekly in the Sirius Arts Centre (originally the site of the first sailing club in the world). This Arts Centre also holds regular art exhibitions of both local and international artists. There is a weekly farmer's market in the local park every Friday morning where one can sample local produce. There are shingly beaches within 3km of the house but for a day at the beach we recommend one of the many sandy beaches within 30km of Cobh for example Garryvoe, Ballinamona, Youghal and Inch. Cobh is connected to Cork city by train. The journey lasts about 25 minutes. Cork is a university city since 1845 with many fine galleries, theatres,cinemas, restaurants and shops. For children there is a skate park and large playground near the city park, Fitzgerald's park.
We have had eight exchanges in 2011, 2012, 2013, 2014, 2015, 2016 and 2017.
and are very grateful to our kind hosts. We love to swim in warm seas and especially the Mediterranean. We have visited Italy once, Germany once and Spain six times.