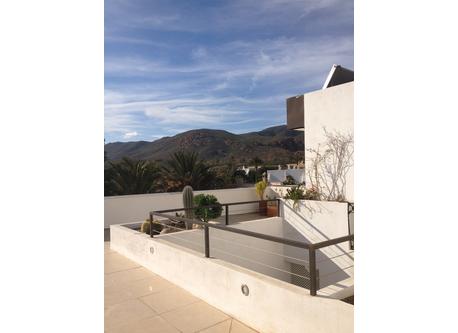 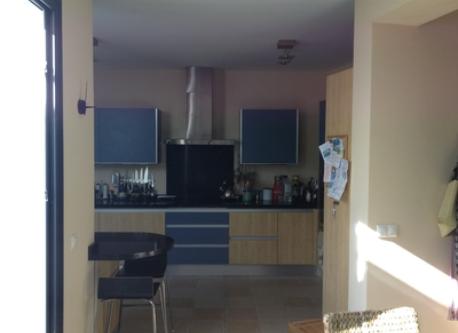 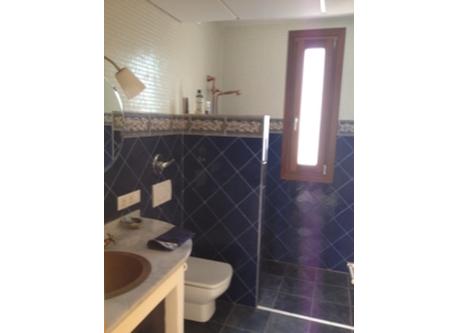 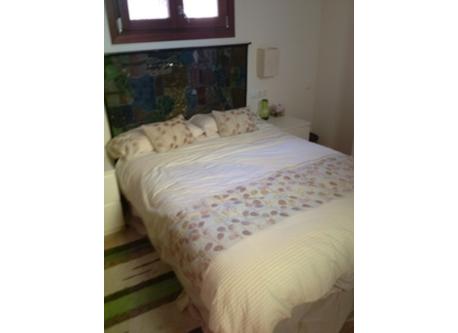 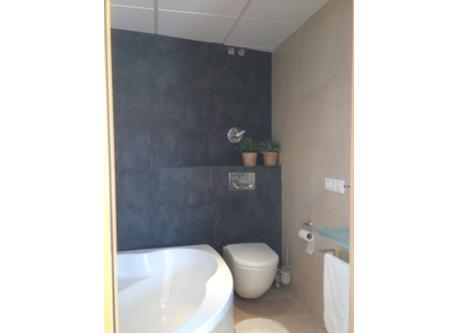 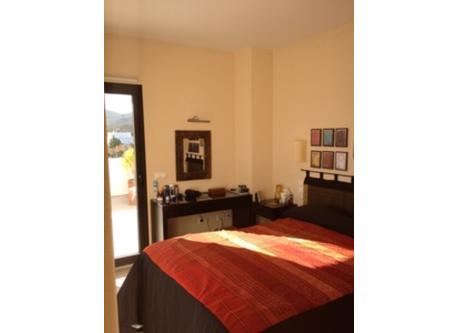 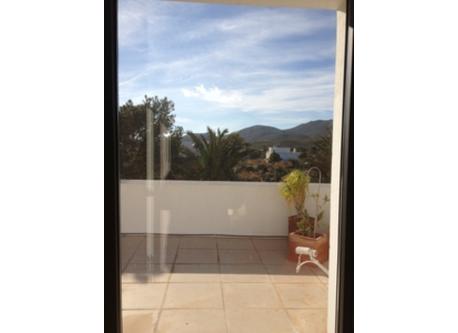 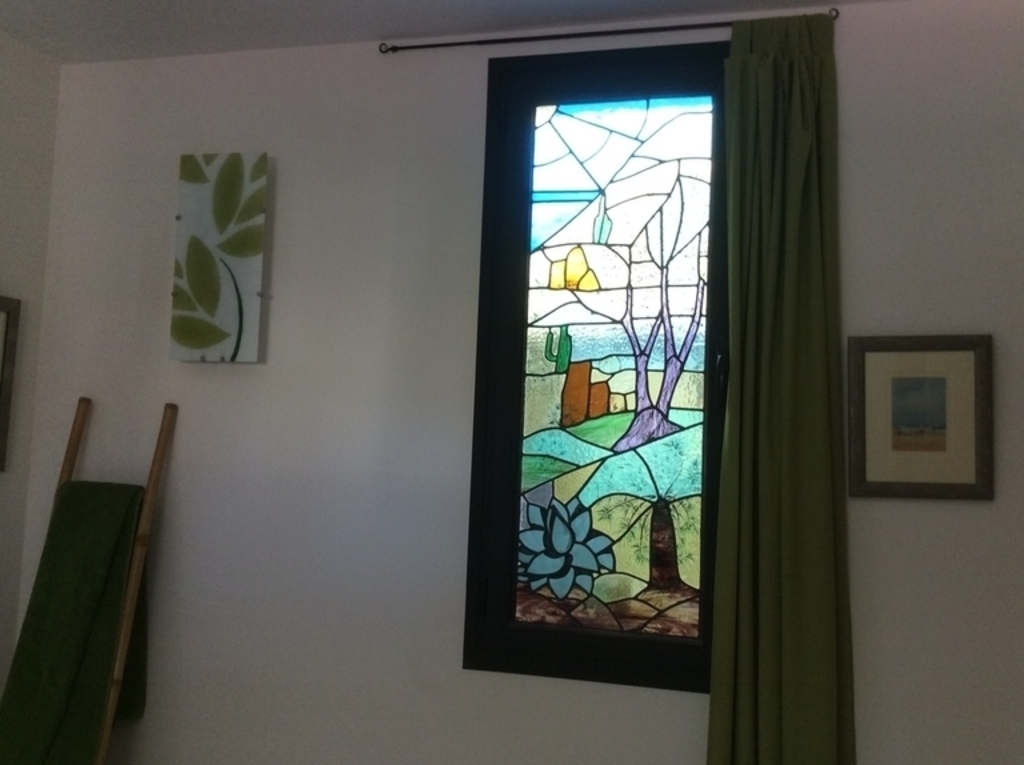 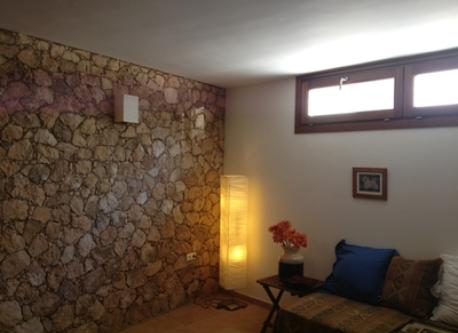 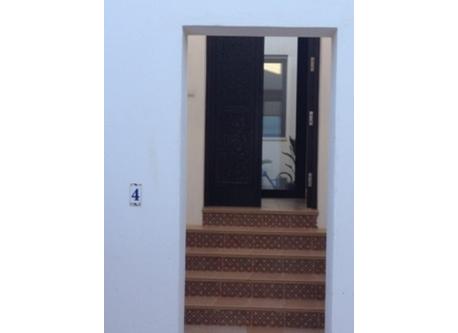 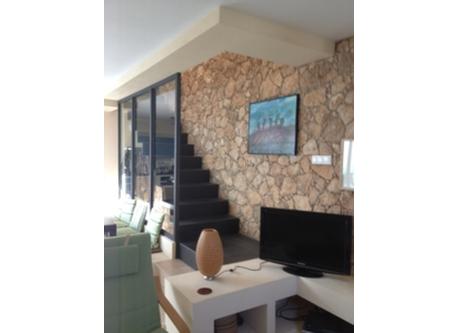 stairs to top floor and terrace 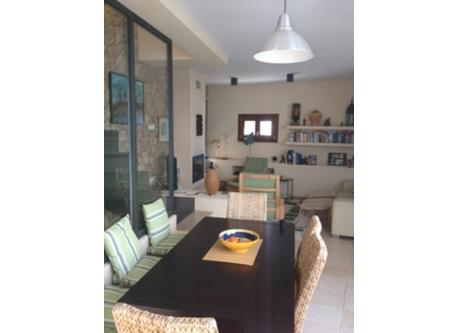 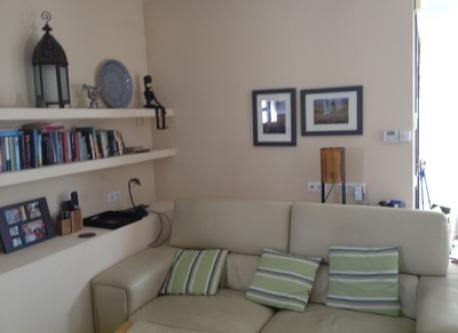 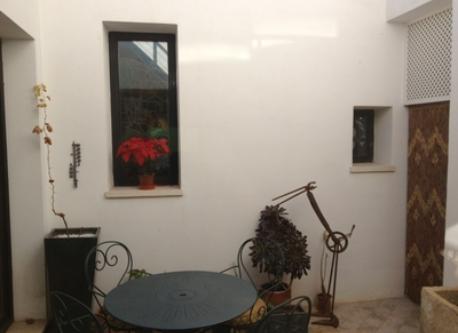 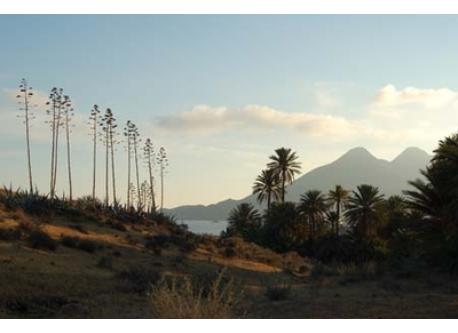 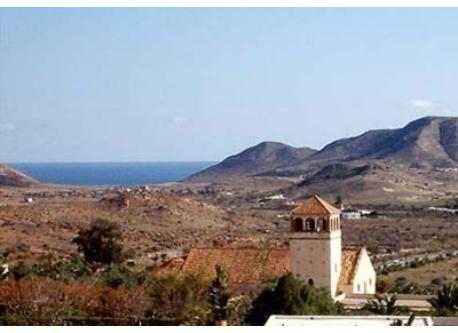 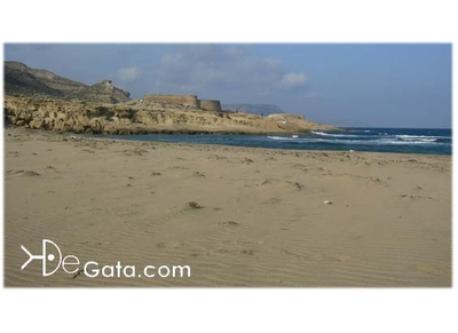 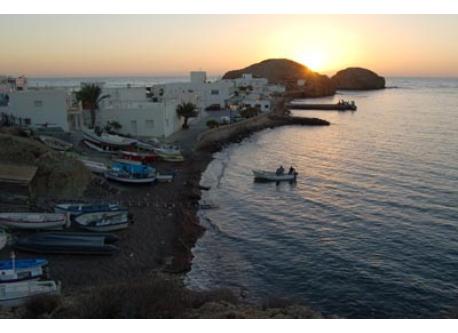 Our house was built in 2010, designed by a local architect, with small windows to the outside, and an internal patio to let light and air into the centre of the house.
It has three main bedrooms, two on the ground floor and one on the first floor, as well as a large area in the basement which contains a couple of beds, and offices which also have sofa beds.  Each of the main bedrooms has a bathroom or shower room attached and there is a further shower room in the basement. Although we are happy to have babies and older teenagers in the house, the property is probably not suitable for energetic children between the ages of 2 and 14.

We are just over half an hour away from Almeria airport and an easy motorway drive of about 2 hours or so from Alicante or Malaga airports.

There is full under floor heating, as well as air conditioning on the ground and first floor.  We have Spanish television, but because of changes in UK satellites, do not have UK TV except through the internet using a UK based VPN. We can give information on how to access this if needed! We have wi fi internet access throughout the house. There is easy access to the beach which is 3 km away, as well as a terrace looking over the mountains at the back.

The kitchen is modern and fully equipped with dishwasher, microwave, fan oven, induction hob and plate warmer as well as a full range of cooking equipment.  The washing machine is on the top terrace near the drying area.

Although we originally built this as a second home, we spend a lot of the winter months here so it is more of a home than a holiday place. We do not rent our house out, but are happy to exchange.  We do not have a car in Spain as we drive our own car from England when we come for long periods of time, and otherwise rent as Spanish car hire is reasonably inexpensive.

Note - the address of our house is not as shown below as our address is not recognised, although the pointer is roughly correct. The true address of the house is Calle Plaza Tenis 4, Rodalquilar on the corner of Calle Gorriones.

This part of Almeria is officially a desert because of the low rainfall.  However, you would not necessarily realize this when visiting the place.  In spring and early summer the place is full of wildflowers, many of which are specific only to this area.  Even in the height of summer, there are still plants and flowers to see, although trees are limited to palms, and a few Mediterranean pines, along with the inevitable figs, almonds and olive trees. The village also has a botanical garden showing the local flora as well as plants such as chumbera, introduced for the manufacture of cochineal and aloe vera.

The area itself is mainly a tourist area, but very different from most on the Med. There are just a handful of villages, no high rise developments, and local fishing boats still pulled up onto the beaches. Many of the beaches are completely unspoilt and some can only easily be reached by boat. The main activities here are walking, mountain biking, kayaking, snorkelling and scuba diving if you are looking for an activity based holiday. Our village has become a bit of a Mecca for the visual arts with many local people providing paintings which are then transferred onto the walls of houses in the village. . In the summer season there are a good number of bars and restaurants in the village, along with two small shops selling general provisions and delicatessen food.

Granada with the Alhambra is a two hour drive away, and our local town, Almeria, has a fine market as well as a Moorish castle and a number of interesting areas. Not far out of America, the Alpujarras mountains start which are the foothills to the Sierra Nevada.  Good wine can be bought from this area which also produces some excellent Serrano ham.  The views are spectacular.

In addition, some 40 kms inland there is Tabernas where many of the most famous Spaghetti westerns were filmed.  This area contains fascinating geological shapes reminiscent of Arizona.

We are surrounded by good walking areas, coastal paths, wild flowers and mountain biking tracks,  Although we are in the middle of the village, you can still hear the sheep and goat bells from the herds nearby, along with the constant chattering of the birds and occasional cockerel. Diving -both scuba and snorkelling -is available locally along with kayaking, paragliding, mountain biking etc as well as general hiking trails among the volcanic calderas now covered with flowering plants. There are golf courses within an hours’ drive.

Summer time also brings concerts in a range of musical styles into the village and surrounding area, and the local administrative town, Nijar, is renowned for its pottery and rugs.

I am now on my own as our children have grown up and moved away and my husband died a few years ago. However I usually travel with a friend. I was a lawyer specialising in making sure that children with disabilities receive a proper education, My oldest son is 41 and lives with his wife and three sons near Malaga. My middle son is a youth worker in England, and our daughter has moved to New Zealand. She is a consultant oncologist working in a hospital and has a small daughter.

Although my small dog lives in the house with me, I usually arrange for her to stay with family while I am away, so she will not be in the house when we exchange.

The lifestyle here is very relaxed, although it gets busier iin the tourist season.  There are plenty of activity sports such as scuba diving, mountain biking, and walking as well as just spending time on the terrace of the house looking at the mountains.  This part of Spain was Moorish for over 700 years and it shows in the house styles as well as some of the spices used in cooking.
Fish is the main food eaten locally, and we have a wide variety of really fine seafoods available.  The red prawns (gambas rojas) from just up the coast are a particular speciality of the area and there are a number of really good seafood restaurants.  For those who want something more meaty, the local chorizo is excellent, along with the morcilla, a blood sausage made with almonds, cinnamon and peppers.  Many of the fruits and vegetables which find their way into kitchens across Europe are grown here. The local markets are full of exotic fruits, all grown locally, such as persimmon, avocado, custard apple, pomegranates, mango etc with bananas from the Canaries (very different in taste from those from central America). Local people also like to eat wild vegetables when in season, such as wild garlic, asparagus and many things we don't have names for. The trick again is to shop locally.

Our village is the administrative centre for the Parque Natural de Cabo de Gata which is a beautiful volcanic region of Almeria right on the Mediterranean.  We are about 35 km from Almeria city and 30 km from the airport and 3.5 km from the beach.
Unlike most areas of the Mediterranean, it remains unspoilt, with no large hotels and beaches which are completely untouched.  The village itself was a gold mining village until the 1960 and still has some of the old mine workings on the top of the hills.   The whole of the valley in which is sits is the caldera from an extinct volcano, leading straight down to a sandy beach which is completely natural.  Many of the old mine workers’ cottages remain although these are empty and have not been renovated.  The village itself has about 100 inhabitants during the winter months – mainly Spanish, but with some Germans who moved here in the 80’s.  During the summer it gets much busier with purpose built attractive houses for rent.  The summer months also sees 8 or so restaurants open in the village.   In addition a number of vans come through selling bread, fish and vegetables.  There are also a few small shops (including an excellent deli with an international selection of food ingredients) as well as a local bar which serves good coffee every morning.

In the summer months the local government often organizes concerts held either in the local church or in the new outdoor amphitheatre, and several of the bars will organize jazz or flamenco evenings.  The nearby town of San Jose (a 15 minute drive away) also has a wide range of events.

Among the 3 exchange partners below, some gave their feedback on their Intervac experience with this member: