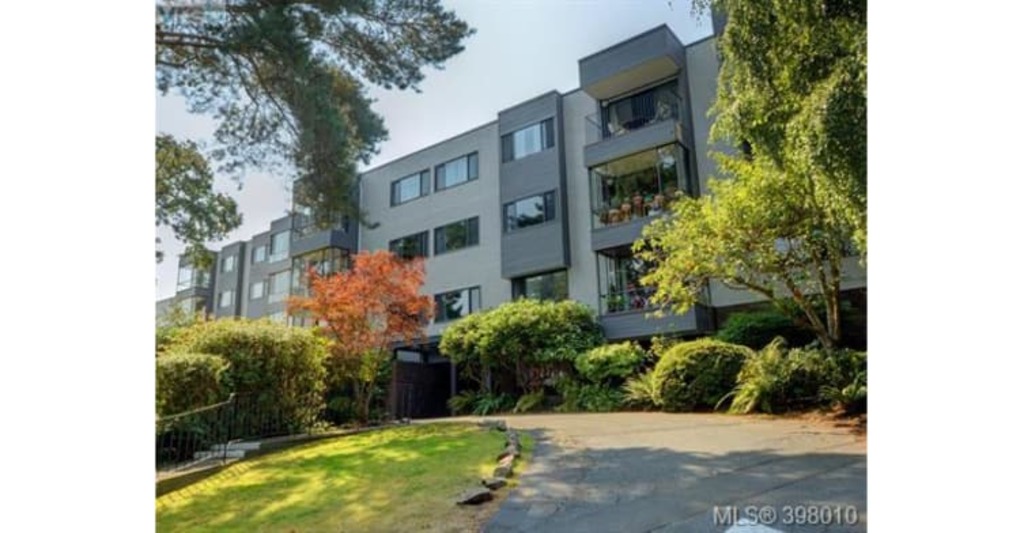 A water view apartment in Canada's Garden City of Victoria

We live in a condominium built on top of Moss Rock Park with a great view of the Olympic Mountains and the Strait of Juan de Fuca. You can watch tug boats, large container ships, and sailboats float by, and deer are frequent visitors.

Our place is 1200 sq. ft. and has a 600 sq. ft. deck with steps out to the rock. We bought it three years ago and have totally remodeled it. The kitchen with large counter opens to the living room and dining area. There are two bedrooms and two bathrooms. The master bedroom (queen bed) has an ensuite bathroom with shower and laundry room and the guest room can sleep four (queen bed and bunk beds). Both bedrooms have large windows that look out onto the water and mountains. The guest bathroom has a tub/shower and both bathrooms have heated floors. This is our retirement home, so we’ve decided on a minimal look and feel. It’s totally furnished with all the modern conveniences.

Looking out at the peaceful scenery makes you feel like you’re in the country, yet downtown is only a half hour stroll and there’s a convenient bus close by.

Victoria, the capital city of the Canadian province of British Columbia, is on the southern tip of Vancouver Island off Canada's Pacific coast. The population of Greater Victoria is about 400,000.
Named after Queen Victoria of the United Kingdom, Victoria is one of the oldest cities in the Pacific Northwest, with British settlement beginning in 1843. The city has retained a large number of its historic buildings, in particular its two most famous landmarks, Parliament Buildings (finished in 1897) and the Empress hotel (opened in 1908). The city's Chinatown is the second oldest in North America after San Francisco's.
Known as "The Garden City", Victoria is an attractive city and a popular tourism destination. It is in the top twenty of world cities for quality-of-life. The city has a large non-local student population, who come to attend universities and is very popular with boaters given its beautiful and rugged shorelines and beaches. Victoria is also popular with retirees, who come to enjoy the temperate and usually snow-free climate of the area as well as the usually relaxed pace of the city.

Our experience: We have enjoyed three exchanges – Sweden, US, and New Zealand.
Car – We have a 2003 Chrysler PT Cruiser, four door, with automatic transmission.

My husband and I are retired; he as a geophysicist in the oil industry and me as a university administrator. Canada is our life bookends -- growing up and now retirement and the United States (primarily Houston, Texas) was our place of work. We divide our time between Canada in the summer and the US in the winter with as much international travel as we can .