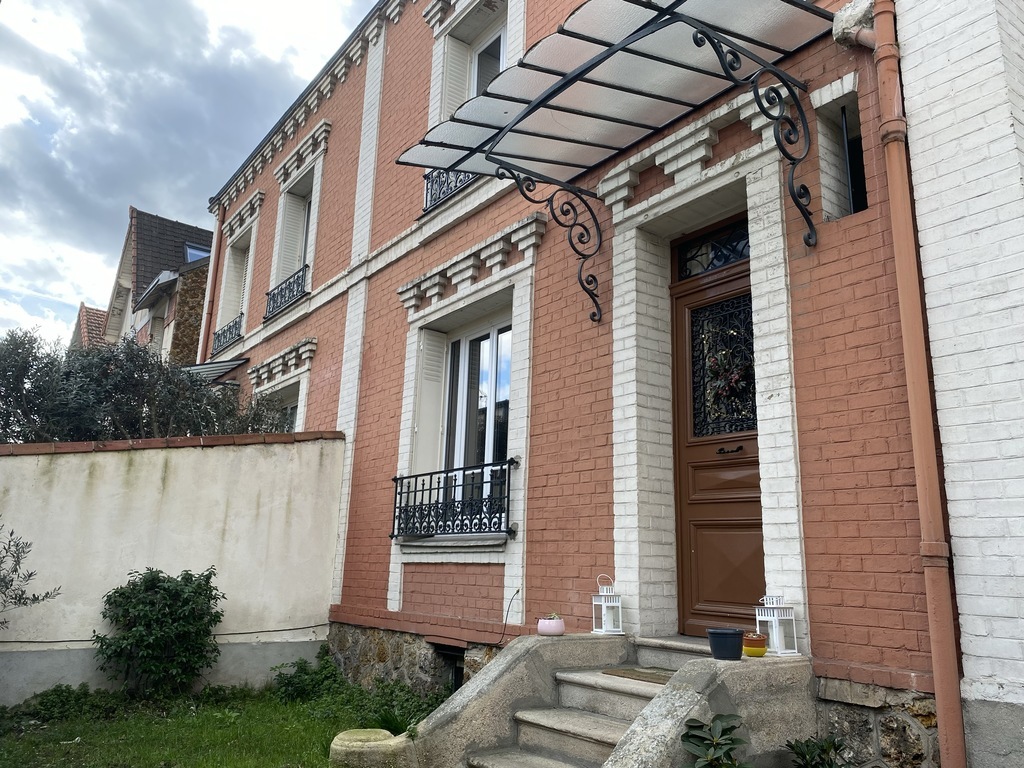 The front door and the front mini garden 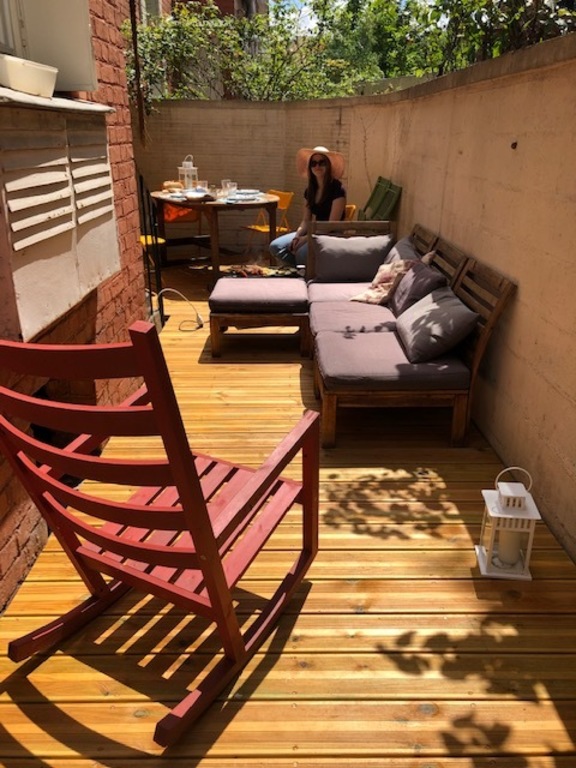 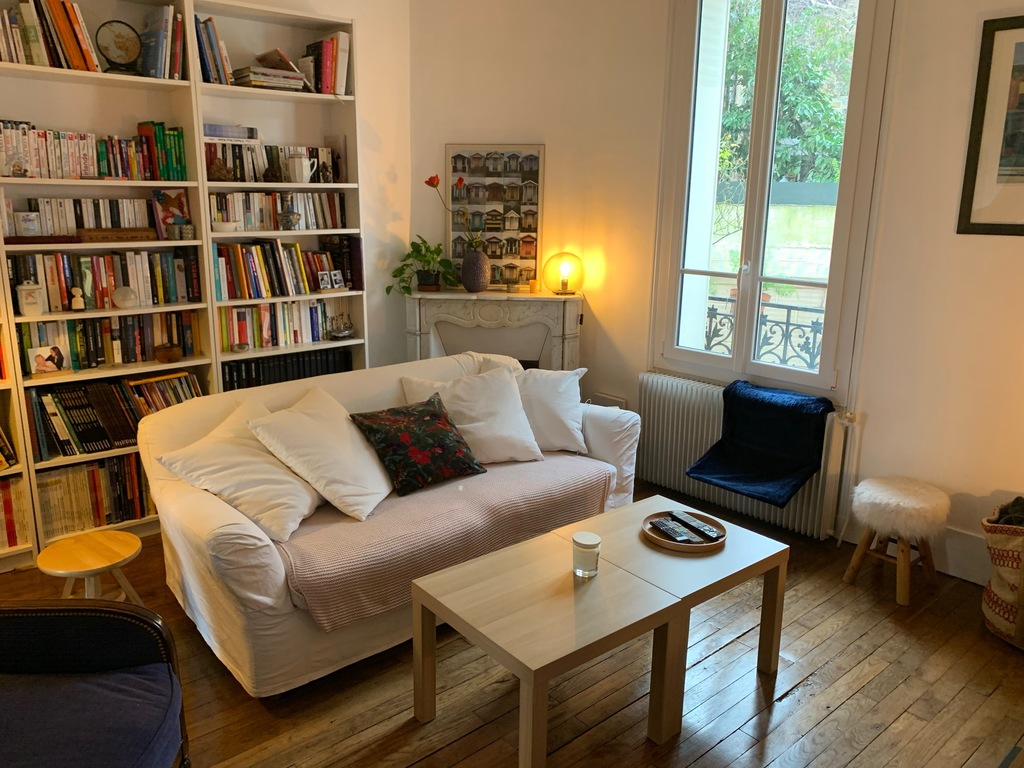 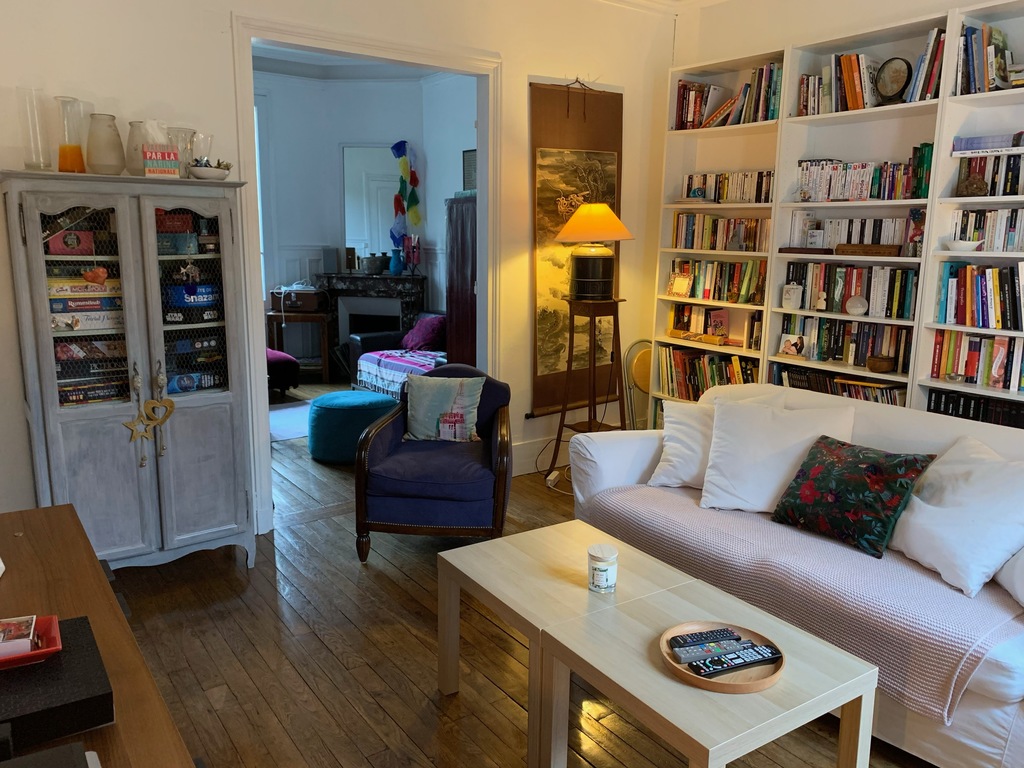 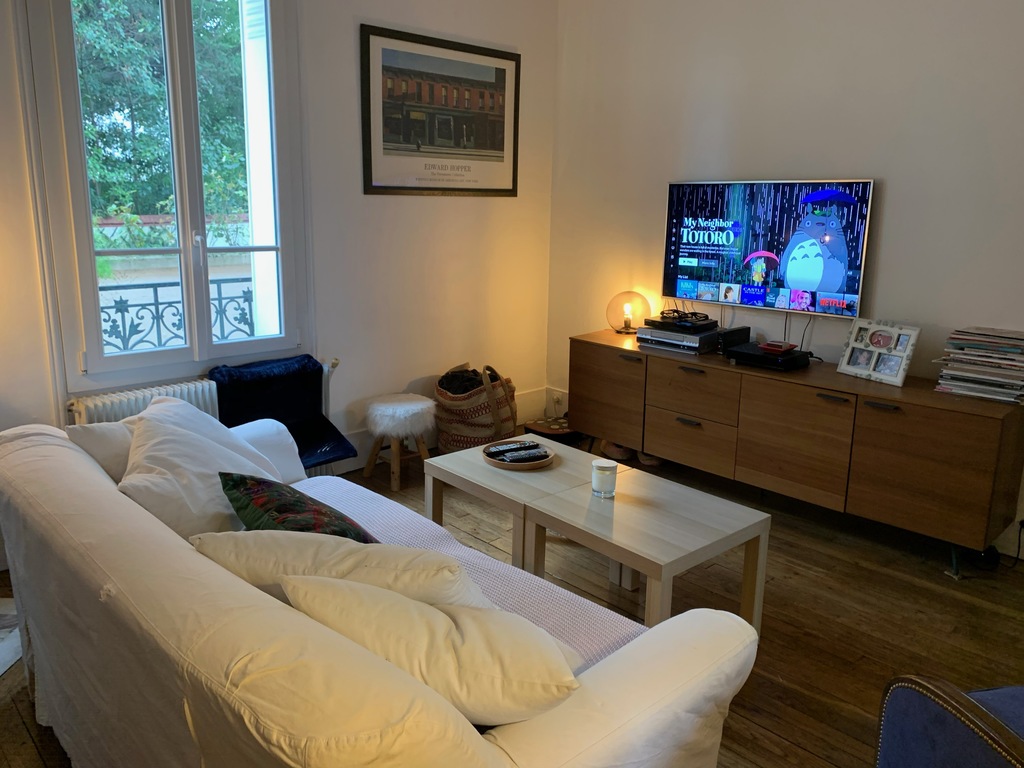 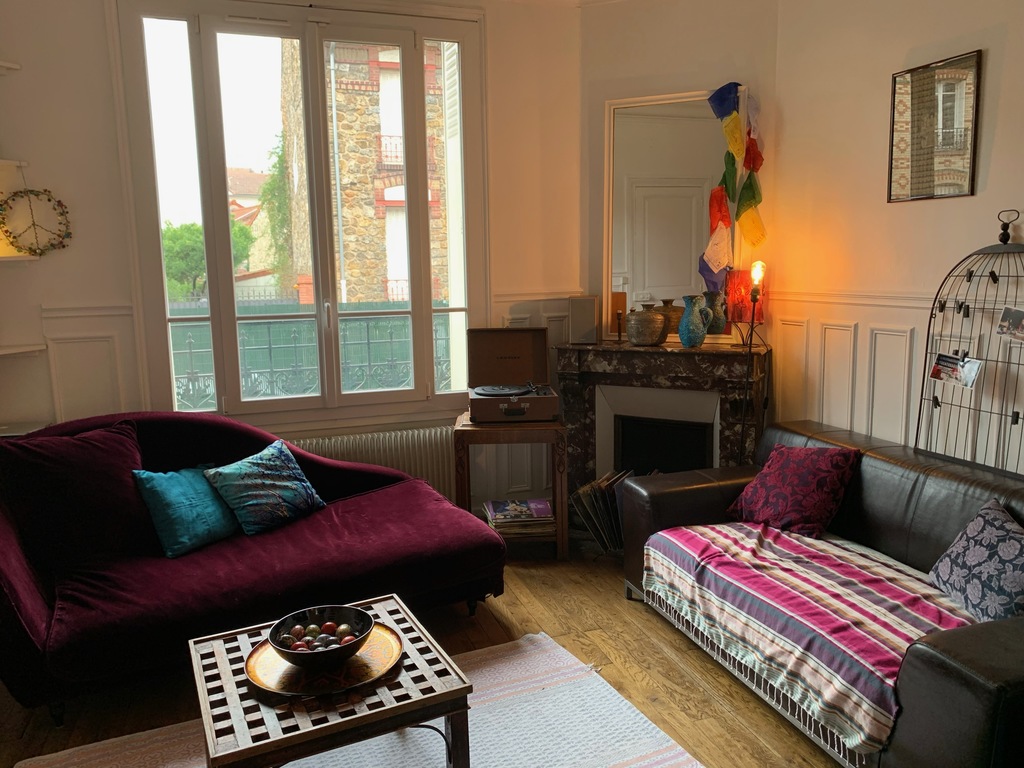 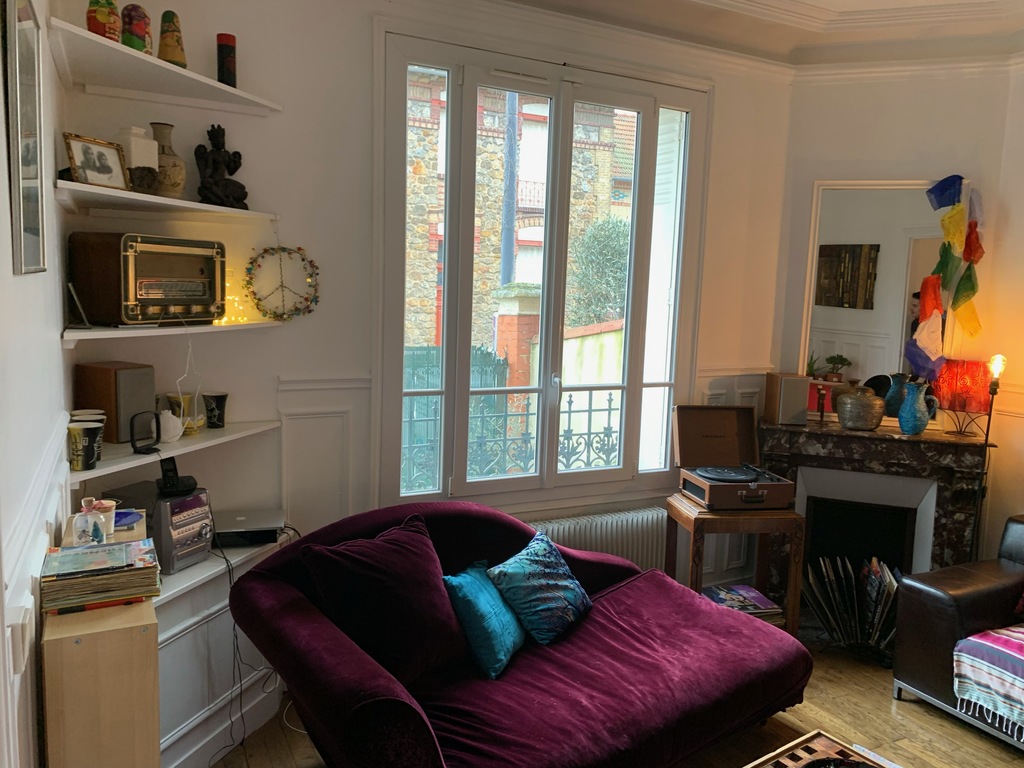 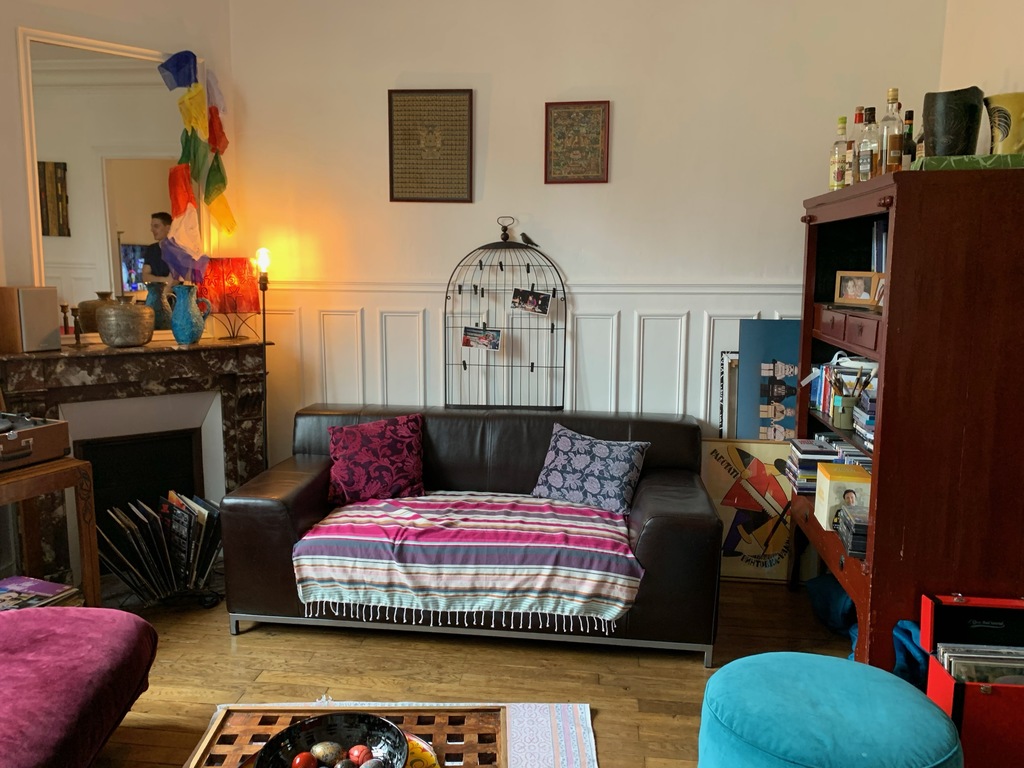 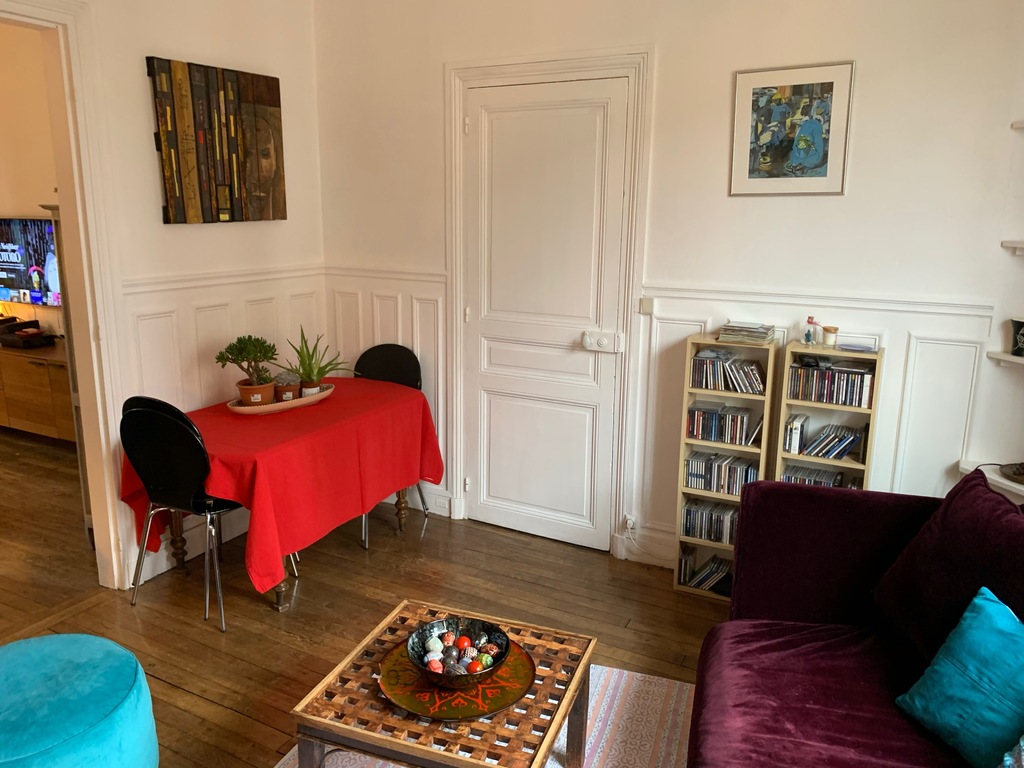 The living room and our dining table 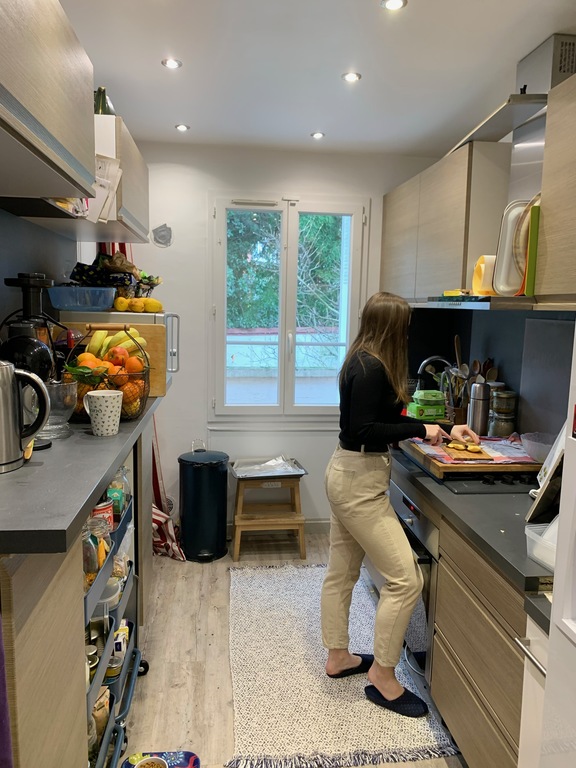 The kitchen (and my daughter cooking) 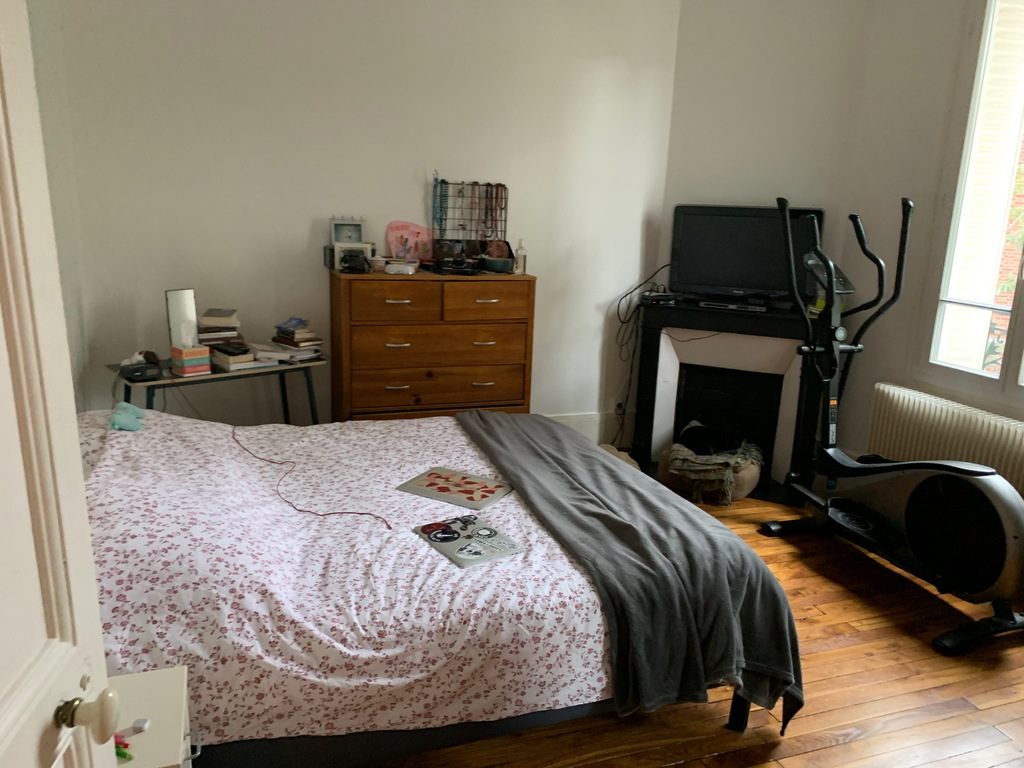 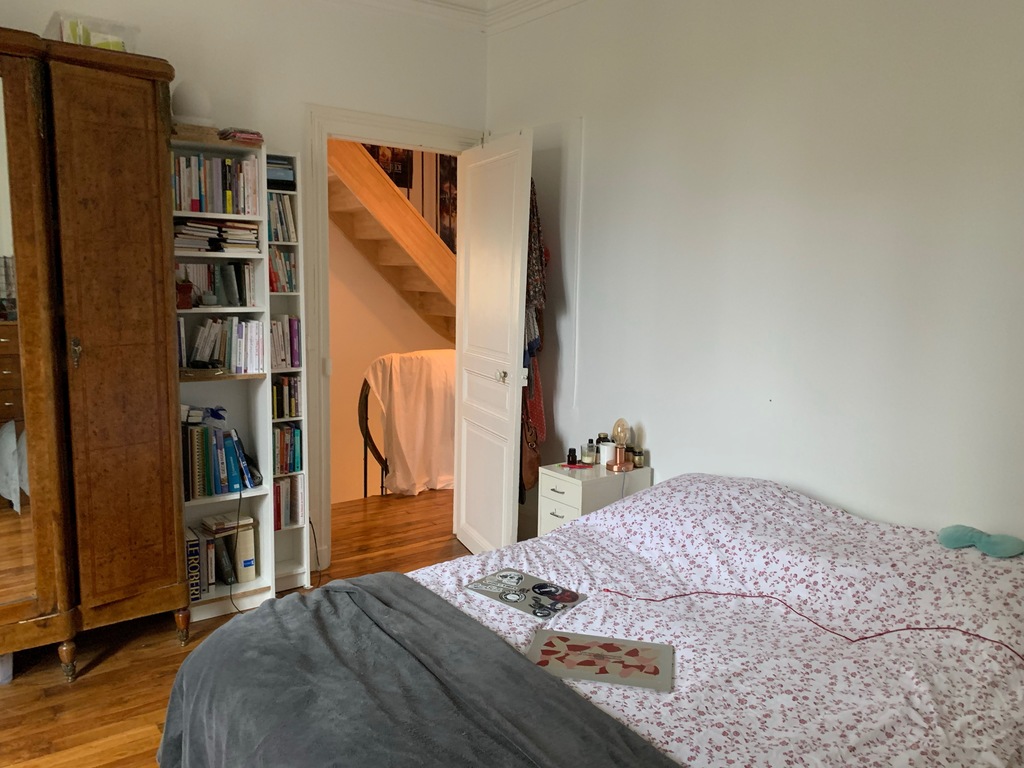 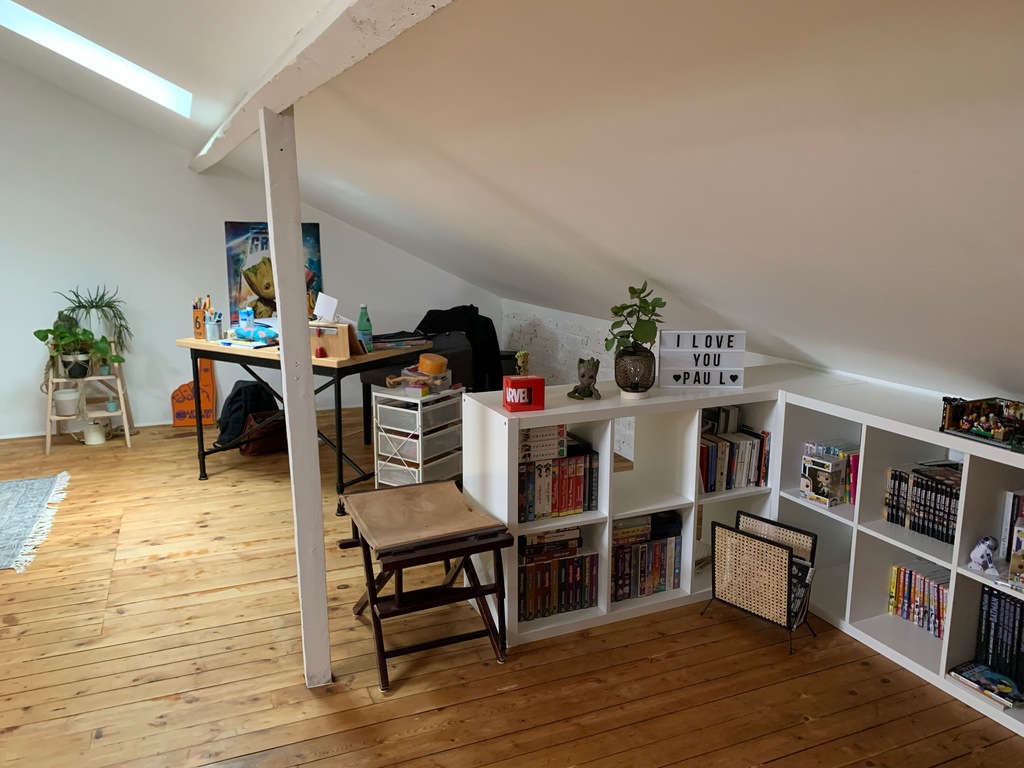 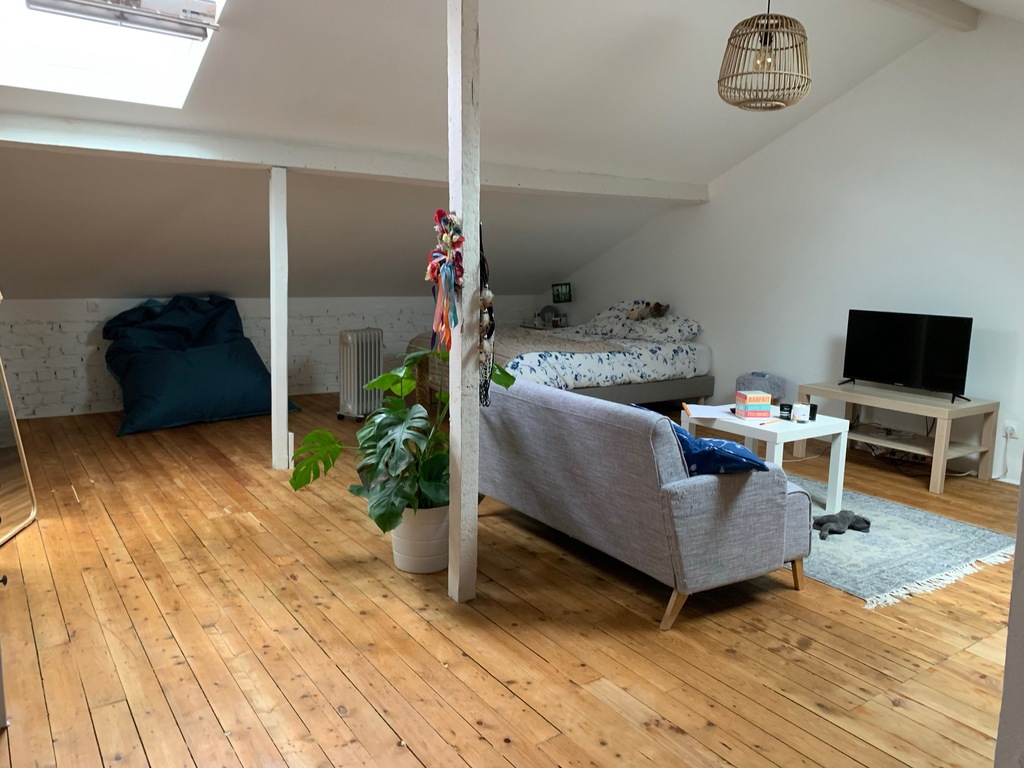 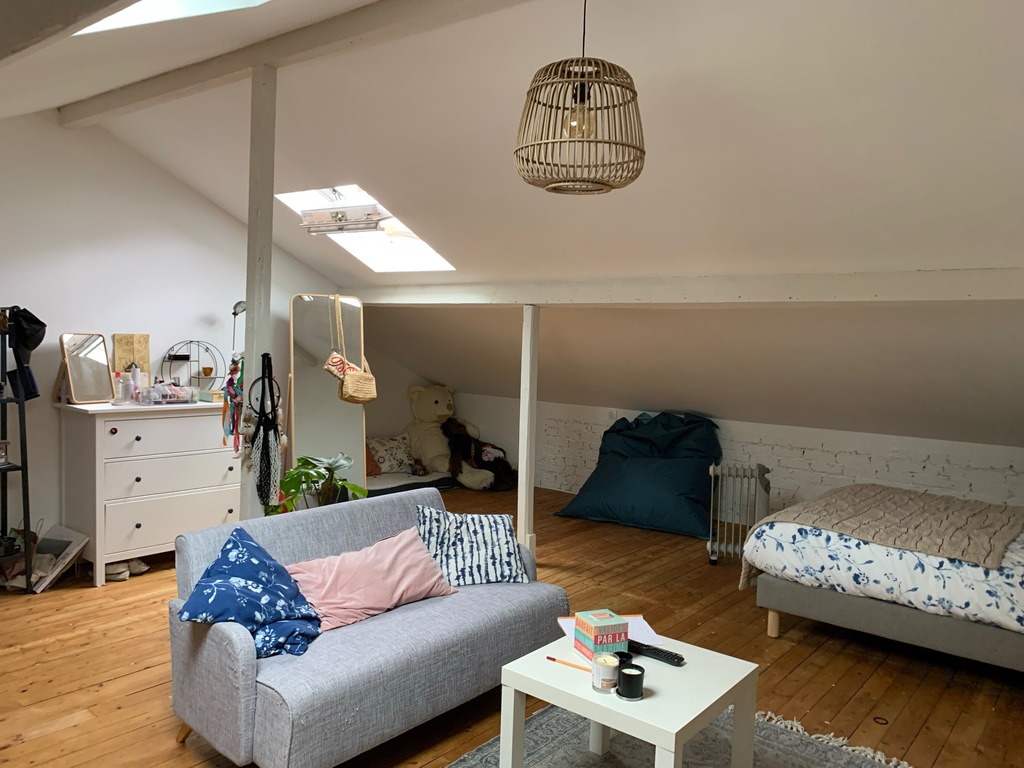 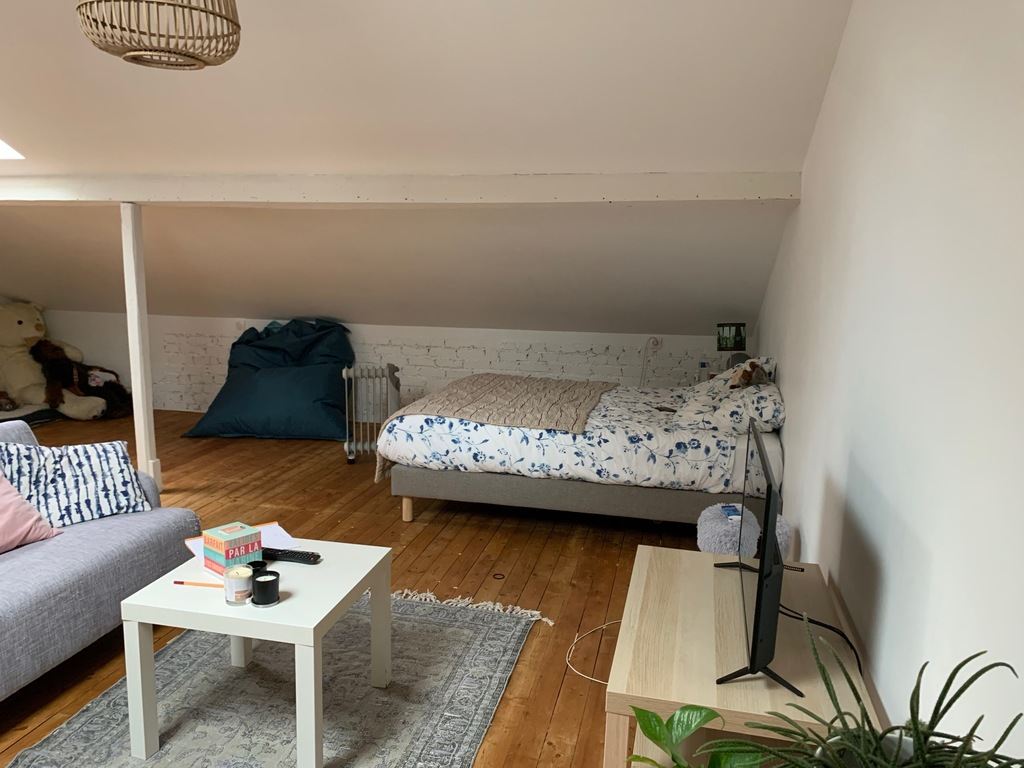 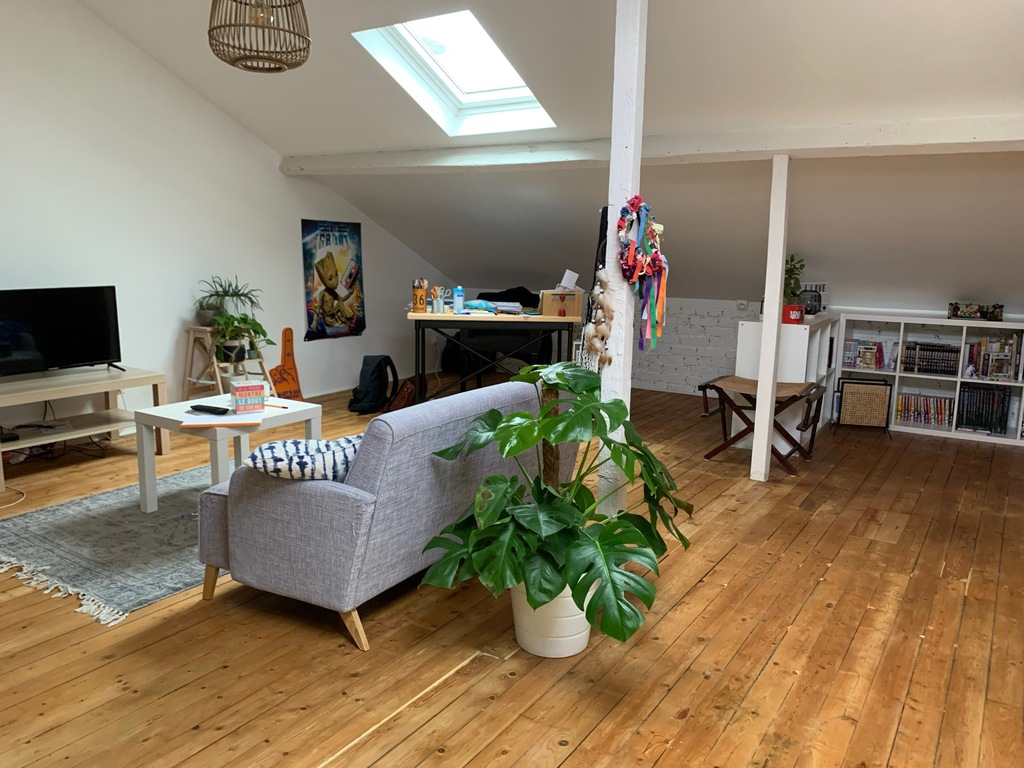 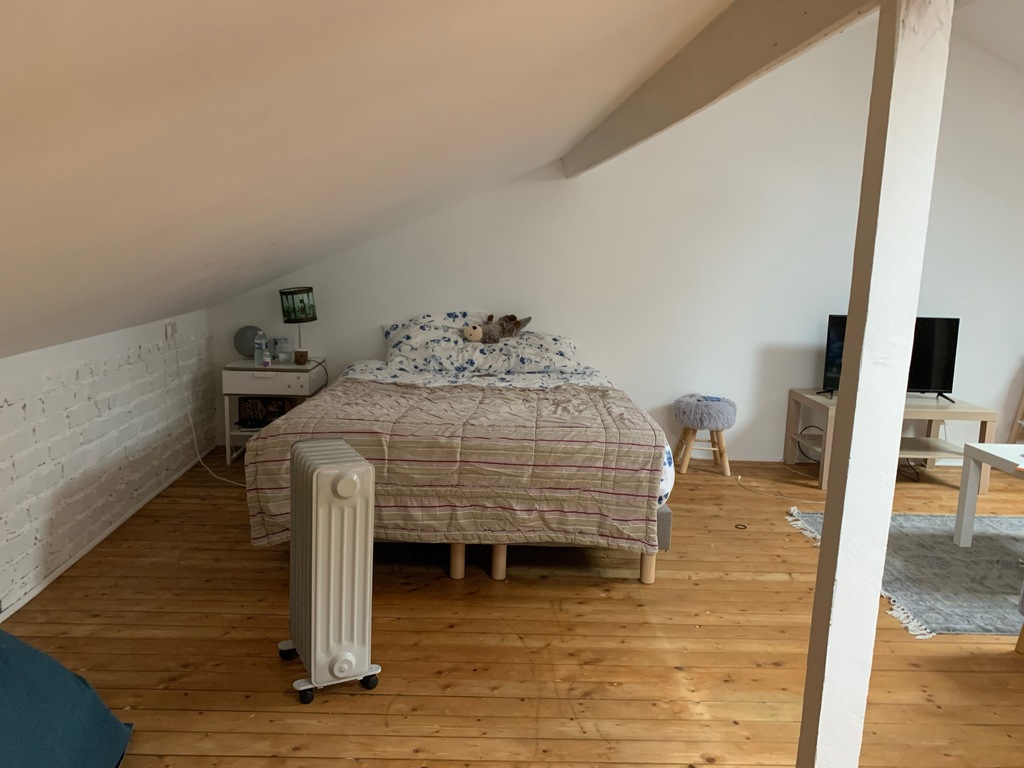 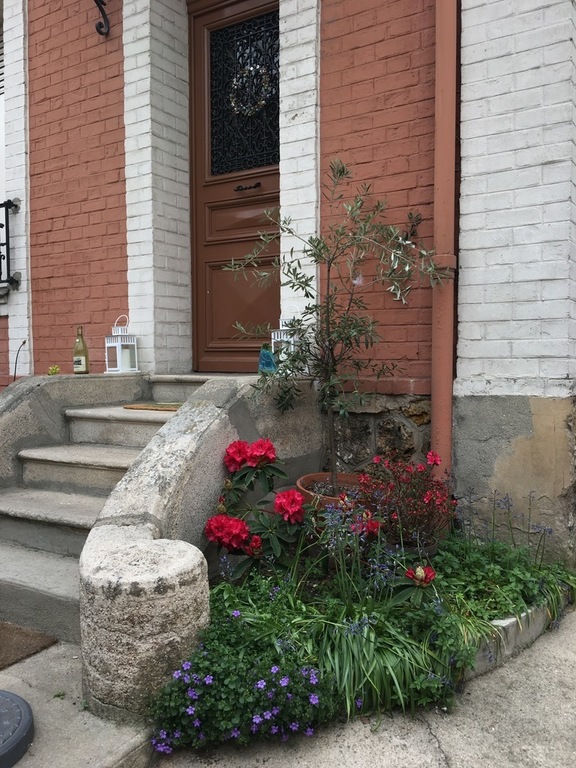 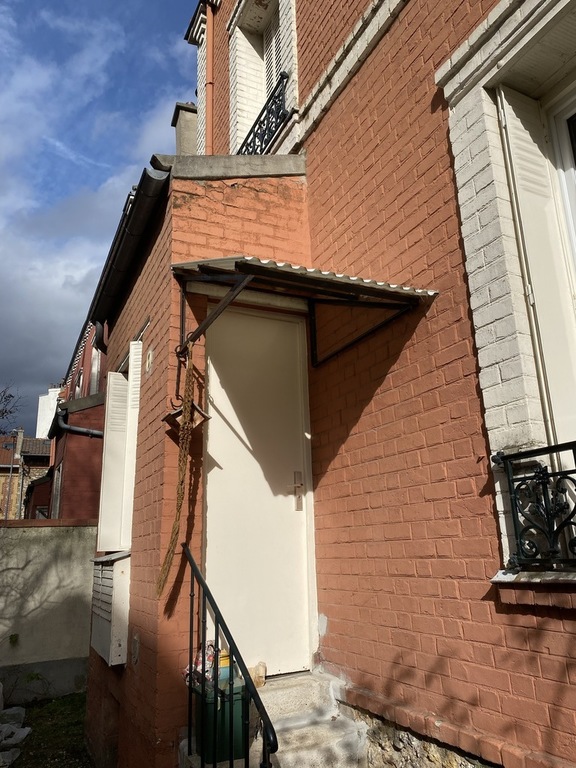 Our cozy house is at 3 kms from Paris.
It is only 2 minutes from the metro 13 that takes you directly to the Champs-Elysées in less than 20 minutes and can take you everywhere in Paris.

The house is situated in a nice neighborhood pavilion, and it has a really small garden in the front were we put our summer living room to enjoy the sun and a courtyard in the back where we like to eat in summer time.

The house makes 120 m ² on three levels, it consists of two rooms, an office, a kitchen, a living room, a TV lounge, a bathroom, one toilet, a huge basement, and WIFI for obvious matter.

My room has a king size bed (160x200), a television and DVD player.
My office is where I work when I’m at home, you can use the printer if you need.
My daughter’s room is the whole second floor of the house and has a queen size bed (140x190). It used to be the attic when we moved in but we made it a nice huge room and transformed it completely.
It has a Tv with a couch, a desk and a chill space where she likes to read.
(We also got a queen size mattress in the basement that can be put in the office if needed)

The TV lounge is equipped of a HD 3D TV, the cable television, an Apple TV, a DVD Bluray player and a lot (I mean A LOT) of DVDs in French and in English.
The sofa of the TV lounge can be transformed into a bed for two people.
The living room is equipped with a hi-fi system, you can listen to CD or radio and connect phone to play some music. There’s a table in the corner that you can deployed ton eat (we usually eat in the tv lounge)

The kitchen is equipped with an American fridge, a convection oven, with gaz stoves, a microwave, a dishwasher and numerous accessories and robots to cook.

You will also have a washing machine, a tumble-dryer in the basement. The basement is also equipped with a fridge and storage spaces.
Outside we have a table at the back as I said earlier where you can eat when the weather allows it, at the front there’s a small green space where we like to chill with our summer leaving room when it’s warm outside. We also haves composting bin next to the garbage can, we’re trying to not waste anything and recycle as much a we can.

My daughter Ivana is 20 years old, she is in college and study economy. She also dances.
I am an office manager, I work for a lawyer office and for an association in Asnières.
We have a cat, Tamino, but when we travel he leaves for holidays too in countryside, you will not have to take care of him.

Among the 7 exchange partners below, some gave their feedback on their Intervac experience with this member: